Find It Fix It Then Raise the Bar 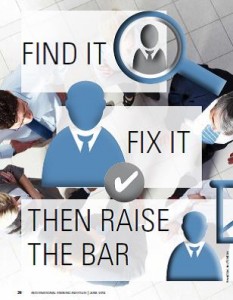 Is your parking operation riddled with staff excuses? Can’t get your employees to produce excellence? Feeling frustrated and sometimes defeated? Every parking manager has had to deal with less-than-favorable performance from frontline and administrative staff. Whether poor performance is due to motivational or training issues, it is clear there is a definite negative effect on the quality of business output required for success.

Because parking is a business, it is crucial that every aspect of running a department or operation bears in mind staff’s ability to successfully perform required tasks. It is every parking manager’s job to find the problem, fix it, and then raise the bar to promote new skills development that pushes staff towards excellence.

Find the Problem
There’s a story I like in the book Becoming a Master Manager, by Quinn, Faerman, Thompson, McGrath, and St. Clair. It is a story of the USS Benfold, a navy destroyer commanded by U.S. Navy Captain Michael Abrashoff. When Captain Abrashoff took command of the ship, he quickly discovered that she was one of the worst ships in the U.S. Navy, and her 330 crew members burst out in cheers when the outgoing captain left his command. The crew suffered from extremely low morale, retention, behavior, and performance.

To determine the cause of the problem, Captain Abrashoff switched from just telling the crew what to do to asking them questions. From individual interviews, he was able to build a trusting relationship with his crew members as he engaged them in productive dialogue about what on the ship was affecting them negatively. Through a series of questions, he was able to find out what they liked most about the ship, what they liked least, what accomplishments they were most proud of, and what changes they would make if given the chance. Though this was a serious commitment to each crew member, Captain Abrashoff was on his way to understanding their plight. His continued efforts resulted in his staff learning they had a leader who would listen and wanted to learn what was influencing them, but who also had high expectations.

It is the role of the parking manager or supervisor to do the same: establish a platform of trust with your staff while establishing performance expectations. To understand what robs a parking business of its ability to operate efficiently, one must understand its hindrances. Asking questions is essential to understanding the true nature of the problem. Often, managers and supervisors make quick attempts to fix the symptoms of a problem rather than invest the necessary time to get to the root cause. Later, they often find problems persisted because they did not delve deep enough. As in the case of Captain Abrashoff, asking penetrating questions can help obtain a more comprehensive understanding of the issue so it can be corrected.

I recently conducted individual interviews with my administrative staff to determine what would happen if their ideal workplace were achieved. The feedback was interesting. I asked the following questions:

Even though the employees never referred to our parking office as the ideal workplace, their responses indicated that we had achieved that status. However, when a different set of questions was asked regarding administrative process and staffing, a new and different problem surfaced that needed fixing—employee skills match.

In the parking office there are four critical areas of administrative duties that require a great deal of attention. They are:

I reserved time every day for two weeks to observe staff performance in each function, and discovered that finding the problem was not as simple as I thought. Because human behavior can be complicated, I had to first determine what part of the problem was a people issue, and what part resulted from the administrative process.

Fix the Problem
To develop a logical approach for resolution, I began by first assessing the skills of each staff member to determine if the duties they were initially hired to do were still a skills fit, and if not, identify what duties might better compliment their current abilities. In other words, there may be employees whose skills may not be relevant for their current duties, particularly as changes in parking operations became more technical in nature. Their initial skills may not have qualified them areas that had changed.

With the assistance of Department Manager Duane Hicks, we began a rotation of administrative duties. The schedule provided each administrative staff member with the opportunity to rotate for one year in each function of the parking office. What became clear after the first rotation was that the issues stemmed from both people and process problems. For some employees, the rotation offered the opportunity to gain a better understanding of the big picture. As a result, they became better focused on the department’s expectations and were able to begin communicating that understanding in their daily contributions. We began by:

Recreating the vision
Because administrative excellence and the development of competent employees were our primary goals, we developed a vision. Words and phrases such as excellence, ownership, accountability, and no more excuses were routinely used in staff meetings and during task execution. These words erased the crutches many used to excuse themselves from being accountable for less-than-satisfactory performance. Excellence became the new vision. Asking them questions such as, “What would excellence look if it were achieved in the task of revenue reconciliation?” let staff communicate their ideas, and let the department formulate those ideas into action items.

Developing the employee
As each employee rotated into a different task function, he or she was able to develop new skill sets that were not in their primary task functions. While one employee may have performed satisfactorily in his or her initial job duties, we discovered he or she often performed with excellence in other job functions. This rotational element became our business practice for all new employees, with goals of employee retention and development of employee skills for succession planning.

The rotation schedule provided employees the opportunity to more clearly understand the interconnectivity of each task and the importance of performing every one accurately as their work passed on to the next level in the process. In the past, employee inaccuracies might cause a 15-minute task to stretch into two hours, which produced a great deal of staff resentment and frustration. Higher achievers were unable to feel a sense of pride in the work they performed because they were overshadowed by the numerous errors they had to address before they started on their own tasks.

Improving the task
While each employee had the opportunity for exposure to something different, we began to see them become invested in the efficient performance of those duties and feel accountable for the outcome as they offered suggestions for process improvements. Each rotation allowed a new set of eyes to review what was necessary to achieve excellence and what hindered it in the past. This process continued until the department had achieved optimal efficiency in each task. Staff suggestions were implemented and employees were recognized and rewarded for their contributions to the forward movement and achievement of our department’s business and operational goals. A sense of pride became apparent as staff members began to encourage each other to go beyond established goals and commit to more innovative ways to task execution, resulting in improved customer service. An even greater value was realized through this endeavor: the creation and development of a strong, cohesive team.

Creating a pool of competent backup
While employees gained new skills and became more intrinsically motivated by a job well done, a backup pool of competent employees who could step in at a moment’s notice to perform any task required was created. Each function now had a specific person designated as backup. Little did we know that this pool creation would become a great motivator for staff.

After realizing all of the benefits the rotational opportunity provided, we made the decision to leave employees in those job duties that offered skills matches. Employees who had struggled with satisfactory performance now exceeded expectations. It was time for the rotations to end and for each person to settle into job functions for which they were best suited. Our employees took ownership for the quality of their output while focusing on meeting the department’s goals and objectives. This was something we had worked hard for years to achieve.

Raise the Bar
The time had come to raise the bar. As new structures were built and new technology was installed, staff had to learn how to operate the new software and understand its technical options to promote continued efficiency. The installation of photovotaic panels, electric vehicle (EV) charging stations, a wayfinding system, license plate recognition (LPR) systems, and a cashiering station all provided new experiences and the opportunity for increased levels of competence. Raising the bar has not only become a source of personal excitement, but continues to strengthen the pursuit of innovative ideas and foster the development of critical thinking among our frontline staff. Tasks that were once performed manually are now achieved through networked information systems that provide essential data for business decision making. Having quick access to this data has afforded frontline staff the ability to provide excellent customer support and effectively find solutions for patient, visitor, faculty, and staff issues.

Finding the problem was a great achievement and fixing it produced new operational efficiencies, but raising the bar has become a real motivator as staff take great pride in what they produce, present, and pass on to others.

Plato stated, “Human behavior flows from three main sources: desire, emotion, and knowledge.” We saw the desire of our employees to be their very best. Once they were given the opportunity to understand the connectivity between functions and the effects their unsatisfactory performance had on others, they decided to rise to the occasion and perform excellently with the increased competence they achieved through the rotational process.

Today, I have the distinct pleasure of working with one of the greatest frontline administrative teams I’ve seen in 15 years of managing staff. They have become invested in not only their own success, but that of their co-workers as they support each other emotionally and professionally. This endeavor not only strengthened the work relationship, but has been the catalyst for the development of friendships outside of the workplace. I guess Ghandi was correct when he said, “You must be the change you wish to see.”

Rotating staff in the various functions became that change agent that assisted our staff in seeing what could be possible. I am grateful they decided to make that change a sustainable one.

Wanda Brown is assistant manager, parking & transportation services at the University of California Davis Medical Center. She can be reached at wanda.brown@ucdmc.ucdavis.edu or 916.734.8117.