A Win-Win on Two Wheels 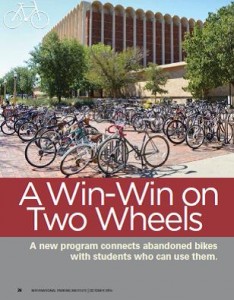 By Craig Cotton and Stacy Stockard

The cycle always repeated. Every August, fresh-faced students showed up to the Texas Tech University campus to begin their collegiate journeys, shiny new bicycles in tow. And at the end of every May, hundreds of bicycles littered the campus. Every bike rack had a dozen bicycles still locked up and either left behind by their student owners or forgotten and immobile due to a lack of repairs.

Texas Tech Transportation and Parking Services (TPS) employees spent weeks cutting the locks of bicycles, collecting them, and sending them to summer surplus auctions. They often picked up more than 500 bicycles. Locals bought the bikes for pennies on the dollar while TPS saw no remuneration for the man hours spent. Every August, it started over with freshmen purchasing brand-new bicycles. After awhile, TPS knew we had to get the abandoned bikes back in the hands of the students who needed them and break the cycle.

By the Book
A university operating policy placed TPS in charge of determining which bicycles were abandoned by their owners and then collecting the abandoned bicycles. Once finals end, students take their bicycles from campus. A TPS crew tags all bikes found on campus immediately following May commencement.

Tagging involves attaching a tag to a bicycle’s handlebars stating that the owner has 30 days to remove the tag to show the bike is not abandoned. A string is tied to the spokes of a wheel so when the owner rides the bicycle, the string breaks. This provides a backup method of ensuring a bicycle in use is not collected.

Thirty days after tagging, TPS begins collecting bicycles whose tags have not been removed or whose strings are still tied to spokes. The bicycles are trailered back to the TPS tow yard, where they are assigned a space on a bicycle rack and logged into the NuPark Campus parking management software as a bicycle tow. TPS gives owners of registered bicycles at least another 30 days to contact the office. Together, tagging and collecting take three weeks for the crew of five to six TPS employees.

For a long time, the collected bikes made their way to the university’s surplus, where unneeded and abandoned items, such as office furniture, were auctioned off a few times per year. Not many bicycles made their way back to students who needed them, and TPS saw very little return financially or a positive impact on the transportation system from the auction. The trend repeated every year until 2014.

A Growing Trend
Texas Tech’s student population continues to grow—currently, the campus hosts 35,000 students with a target of 40,000 by 2020. TPS estimates that 5,000 to 6,000 students and employees bike on campus during the fall and spring semesters. Students use bicycles to commute from their homes and residence halls and even from their vehicles in commuter lots, bypassing the busing system.

That said, many students haven’t biked in years. They want to try cycling again but have reservations. Some are hesitant to spend the funds on a new means of transportation on top of the cost of attending a university. If they don’t enjoy cycling or aren’t sure how to make a simple repair to their bicycle, they stop using their bikes and see a loss on their investment. The latter leads to a number of abandoned bicycles. And if the student enjoys cycling, many times they upgrade from an entry-level bicycle to a better built, more durable bicycle. Clearly, it made sense to try and match up homeless bikes with interested students.

Setting Up the Sale
After the summer 2014 abandoned bicycle collections, the department held back 130 bicycles in its tow yard. Texas Tech’s Office of Risk Management asked that the bicycles sell in as-is condition to limit any liability from repairs made by TPS, so those in poor shape or needing major repairs were passed to surplus instead of sales. Those that needed simple fixes, such as derailed chains or flat tires, went up for sale.

Programmers set up bicycle sales in NuPark, which offered an online payment option and pulled from not only the bicycle tow listing but also campus parking accounts. This also limited the sales to the target audience: Texas Tech students and employees. TPS prominently placed waivers throughout the sale pages—including each bicycle’s purchase page—disclaiming any warranties.

Each bicycle listing featured a photo of the bicycle taken at collection, the make, and the wheel size. The department priced the bicycles at an egalitarian $40 across the board, and each came with a new U-lock, one of the most theft-proof types of bicycle locks on the market. The sales were not intended to serve as a money-making venture, so the $40 covered the cost of the U-lock and a small portion of labor costs.

Throughout the summer, those staffing the information and purchasing tables at new-student orientations shared details about the upcoming sale with incoming students and their families through conversations and informational postcards. Roughly two weeks before the sale date, TPS began marketing the sale through Twitter, TechAnnounce (the daily campus-wide email messaging system), and the Texas Tech Parent and Family Relations eNewsletter—all free resources. Word spread quickly throughout campus.

Sale Logistics
Programmers set the NuPark Campus bicycle sales page to become visible at midnight on Monday, Aug. 18, 2014—the first business day following residence hall move-in. Students and employees had three ways to purchase bicycles: online through their parking accounts, in-person at the TPS office, or at a bike sale outpost. The outpost consisted of about a dozen bicycles in the sale stationed in the plaza between the student union building and library—the area of campus with the greatest amount of foot traffic. It also provided a chance for department visibility and interaction.

Success
TPS knew the bicycle sale would go over well with Red Raiders. Employees in all areas of the department heard of students and employees in search of affordable bicycles, and a number had unsuccessful attempts at purchasing one at the surplus auctions. But TPS didn’t know just how popular the sale would be.

Students who needed bicycles got them at a reduced rate. With the U-lock, TPS gave purchasers the ability to prevent bicycle thefts on campus. Because bicycle registration occurred when the bicycles were picked up, registration numbers grew, and crews could identify more bicycle owners throughout the year and during 2015 abandoned collections. When a purchaser picked up a bicycle, TPS employees shared information at Bike Tech, the on-campus bicycle shop housed in the Student Recreation Center’s Outdoor Pursuits Center. Bike Tech provides a shop where Texas Tech students and employees use bicycle repair tools free of charge or, for a minimal amount and the cost of parts, have bicycle mechanics fix problem areas.

Most importantly, the new system introduced more students and employees to cycling. The sales got bicycles back into the hands of those who needed or wanted them at a low cost. Employees who never biked to work purchased bicycles to try the commute. In one case, an employee who had no success buying a bicycle through the surplus auctions after multiple tries bought a bicycle so she and her husband could finally bike together. Many bicycles went to incoming students just starting college life, and others went to returning students who wanted to give bicycling a shot for the first time.

Because the 2014 sale sold out so quickly, the department doubled the amount of bicycles offered for sale in 2015 and split them into two sales: Monday, Aug. 17, the first workday after students moved into residence halls, and Monday, Aug. 24, the first day of class. The first sale sold out in six hours and the second in 12 hours. A total of 342 bicycles sold in 2015. Even with increased offerings, the demand continues to rise.

Craig Cotton is unit supervisor of Texas Tech University Parking Services. He can be reached at craig.cotton@ttu.edu.

Stacy Stockard is senior editor of Texas Tech University Parking Services. She can be reached at stacy.moncibaiz@ttu.edu.