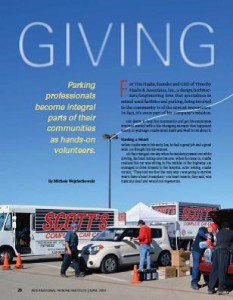 For Tim Haahs, founder and CEO of Timothy Haahs & Associates, Inc., a design/architecture/engineering firm that specializes in mixed-used facilities and parking, being involved in the community is of the utmost importance. In fact, it’s even part of his company’s mission.

His desire to help his community and get his employees involved started with a life-changing moment that happened nearly 20 years ago: Haahs faced death and lived to tell about it.

Having a Heart
When Haahs was in his early 30s, he had a great job and a great wife. He thought his life was set.

All that changed one day when he suddenly passed out while driving, his head falling onto his arm. When he came to, Haahs realized his car was sitting in the middle of the highway. He managed to drive himself to the hospital. After testing, Haahs recalls, “They told me that the only way I was going to survive was to have a heart transplant.” His heart muscle, they said, was basically dead and would not regenerate.

For the next two years, Haahs lived thanks to medications and a pacemaker and defibrillator actually installed in his body. For the last six months before his transplant, he was so ill, he stayed in the hospital; the final month, he was unconscious.

Facing death made Haahs think—a lot. He and his wife prayed together, and he read the Bible and thought a lot about life. He remembers saying to God that if he got another chance at life, “I want to rededicate my life to serving others, those who are in need.”

After his transplant, Haahs spent a lot of time thinking. The thought that kept coming back to him was that he wanted to find a way to help others. But he knew his true passion was managing projects. So when he established his company, he made sure he could give back through his work and that his employees would share in this mission, too.

Today, employees of Timothy Haahs & Associates, Inc. have been involved with charities such as Habitat for Humanity, Big Brothers, Big Sisters, American Cancer Society, American Heart Association, Red Cross, and Switchboard of Miami, Inc., among many others.

“We really are born to help each other,” says Haahs.

Tons of Food
Like Haahs, many people in the parking profession are reaching out to help make a difference in their communities. The Parking Services Department at the University of Alaska, Anchorage (UAA) has given tons of help—literally.

In 2009, UAA Parking Services partnered with the university’s Human Services Club in its Ton in Ten food drive, which has the goal of collecting a ton of food in 10 days. While the club had run the program for a few years prior, this time someone proposed that students be allowed to pay for parking tickets with jars of peanut butter and jelly.

“It sounded crazy enough to work, so we tried it,” says Glenna Muncy, MPA, director of parking services. The food drive, which takes place in early November each year, started when the department recognized that students—particularly those with families—were struggling with food insecurity due to college expenses. The UAA on-campus emergency food cache (which supplies students who need it with a three-day supply of food) is just one of the beneficiaries of the drive.

“The program has been very popular with students especially, but staff and faculty have also taken advantage of the ability to save money and support a good cause,” says Muncy. “People tend to be less upset about being issued a ticket if they have an alternative means of recourse to paying out-of-pocket. From the first year to last year, we have just about tripled the number of citations being settled in the 10-day period.”

Besides helping needy people in the community, Muncy says the food drive has also improved the public perception of her department and introduced people around campus to its office and staff.

“Because most of our services are offered online, many students have no idea where our office is located or what access they have to alternative transportation programs offered at no charge. This program showcases our location because it requires people to come in to make the donation to settle the ticket,” says Muncy. “We also see a better return on other outstanding citations. If a customer has several tickets, they can settle up to two with a peanut butter and jelly donation. Usually, that translates to fewer tickets that get sent for collection at the end of the semester, more late tickets being paid so student accounts are current, and ultimately, labor saved from having to track citations that otherwise would have been ignored or procrastinated until after final exams.”

While it may mean a little less revenue over time, Munch says the benefits far outweigh the costs: “I love this program!”

Rewarding Good Behavior …and Parking
Dulce Gomez, parking enforcement supervisor for the City of Palmdale, Calif., knows drivers aren’t usually happy to see people from her department. She and her staff decided they wanted to change this reaction. In 2011, they brainstormed about what they could do to reach out to the community and have a positive effect. The result was the city’s Good Ticket campaign.

Each year since, from Thanksgiving through Dec. 24, parking enforcement employees patrol, but in this case, they’re looking for something different: people who demostrate good parking habits.

Parking can be difficult almost anywhere during the holidays. But at malls, it can be especially problematic, and Palmdale’s Antelope Valley Mall is no exception. Gomez says her officers specifically look for people who take the extra time to park correctly between the lines, for example, rather than speeding into a space and taking up a couple as a result. The staff members wait for the people to finish parking and then approach them with a good ticket and a gift.

“We tell them, ‘I observed that you made an extra attempt at trying to park legally and correctly, and being courteous of your neighbors,’” says Gomez. The staff member then gives the person a Good Ticket, along with a choice of a gift card to the mall or local restaurant; a pair of tickets to a local playhouse or to DryTown, a city-owned waterpark; or a free breakfast buffet.

Besides patrolling the mall, officers also patrol schools and reward parents who park, use the crosswalk to pick up their children, and then return to their cars with their kids and put on their seatbelts. She admits that when they first began to approach parents, drivers immediately thought they’d done something wrong. They’re shocked and pleasantly surprised when they are rewarded. “We say, ‘Good job! You did a good thing today!’” says Gomez.

Helping Needy Children
For more than 10 years, the City of Boston has held a Toys for Tickets program. According to Gina Fiandaca, director of the Office of the Parking Clerk, the city chooses three days of parking ticket issuance in early December and then allows people who have received tickets for non-public-safety violations to pay with a new unwrapped toy that gets donated to the mayor’s needy children drive.

For example, if someone receives a ticket for parking overtime at a meter, the fine is $25. That person can bring in a toy with the receipt and the ticket, essentially paying the ticket with the toy.

According to Fiandaca, Toys for Tickets began because the city always has a shortage of toys for children who need them and the number needed grows every year. Other campaigns, such as Toys for Tots, can’t keep up with the demand. So her department stepped in and began collecting toys instead of tickets. During the last two years, the Boston Red Sox sponsored the drive and donated toys for everyone who brought in tickets that day. Fiandaca says the drive collected between $4,000 and $6,000 worth of toys.

What also makes this program different is that transportation department personnel deliver bags of toys to the needy families after the drive is over.

“I think it makes people feel good to know that they have to pay this ticket anyway, they can pay it with a toy and bring some joy to a child at Christmas time. That makes them feel better about parking illegally and getting a citation,” says Fiandaca. “People are very, very generous. Most people donate a toy well in excess of the cost of the ticket. We get people who will donate a $100 hockey stick for a $25 ticket. The outpouring of support is really very encouraging.”

Involving the Campus
Like in Boston, Texas Tech University’s (TTU’s) Department of Transportation and Parking Services holds a Toys for Tickets campaign. Anyone who has an unpaid parking citation can bring a new, unwrapped toy (or even a few toys that make up the value) that’s worth at least the amount of the ticket, and have their citation dismissed. One way the program is different from Boston’s is that any unpaid parking citations are eligible, even those that are overdue.

For the most part, students and employees of TTU participate. And they donate the gamut when it comes to toys. “A lot of students like to donate toys that they got when they were kids,” says Stacy Moncibaiz, the department’s marketing coordinator. “We get a lot of Barbies, baby dolls, Lego sets, and stuffed animals.”

In addition to the Toys for Tickets drive, parking services also holds three free car clinics each year for students, employees, and visitors. A local mechanic brings staff and equipment to go over a maintenance sheet with attendees and check off anything that needs attention. They will also top off their fluids. Moncibaiz says they also provide free food and drinks for people and even give them a prize as thanks for attending.

Finally, the department holds two bicycle clinics each year, which are free to students and employees. Like with the car clinic, professional bike mechanics (from the campus’s Outdoor Pursuits Center) are on hand to conduct diagnostic exams on bikes and provide small fixes on site. Attendees get free drinks and prizes. Other groups with an interest in cycling both on and off campus attend and man tables.

“We have a strong commitment in our department toward community service, and we really do like to give back to our customers and our people on campus,” says Moncibaiz. “It does help cultivate good will for sure. But it’s something we like to do, too, and it allows us to visit with our customers.”

Michelle Wojciewchowski is a freelance writer. She can be reached at wojowriter@comcast.net.